You would be hard pushed to find a more idyllic activity in Cambridge; sitting in a punt on a warm summer’s afternoon, taking in the sights and sounds of this most scenic of cities. Even with the sun hurling down its rays and, to my dismay, none of the students having any sun cream which I could borrow, I was setting out on my first venture as a Reach 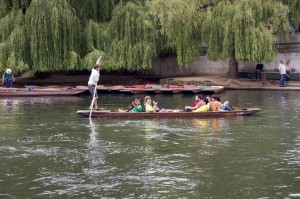 Cambridge Summer School Supervisor. I was as excited as the inquisitive, awe-filled expressions which were worn on the faces of the students. After an underestimation on my part, of the calibre of the average Reach student (getting into the punt and staying dry proved extremely simple in the end), we were taken upstream on a floating tour of six colleges: Queens’, King’s, Clare, Trinity Hall, Trinity and St. John’s. All of us enjoyed the tour guide’s patter, and the humorous historical stories about each college, such as tales of the Cambridge Climbers who infamously placed Santa hats on the 4 spires of King’s College Chapel, and an unassuming riverside door in St. John’s which, mistaken for a fire exit, resulting in a group of students ending up in the river one year. Some anecdotes were met with an air of scepticism. None however, knew that the original Bridge on the River Cam was Magdalene Bridge, and I, like the students, was duly impressed with the guide’s knowledge. Following the tranquil river session, I was tasked with leading a tour of Cambridge University. Most appeared eager to try the Trinity Great Court Run – running all the way around Trinity Great Court quicker than it takes for the clock to strike twelve (equating to 341 metres in 43 seconds). When all was said and done, and we had exhausted our tourist minds and eyes, it was agreed that a thoroughly pleasant and wholly enriching time had been had by all. The international summer program students had received their fix of local knowledge and were reeling off the facts to their friends, and I was only sunburnt in the slightest. Fair to say, I think, that there had been success all round. Ged