Cambridge at Christmas: Festival of Nine Lessons and Carols

Cambridge at Christmas: Festival of Nine Lessons and Carols 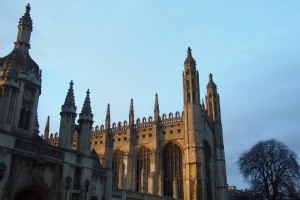 We often focus our attention on Cambridge during the warmer months, and the summer school programs for high school students available. However, Cambridge is also home to a long-standing and much-loved British Christmas tradition. This will be the 95th year of the annual Festival of Nine Lessons and Carols, which takes place every Christmas Eve in King’s College Chapel, Cambridge. Broadcast every year since 1928 (apart from 1930), families up and down the UK consider Christmas to have truly begun when they hear the service start on the radio. Not only does it have nation-wide significance, it is also broadcast on 300 American radio stations, and can be heard all around the world through the BBC World Service, with estimates of millions of listeners globally. Pretty appropriate for the home of our international summer camp! Despite all this, the Festival of Nine Lessons and Carols is still very much connected to Cambridge itself, a city steeped in history. What is it? 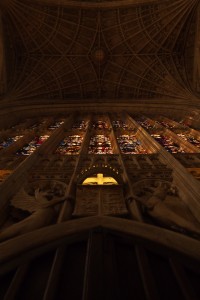 The Festival of Nine Lessons and Carols is a church service for Christmas, created as ‘a more imaginative approach to worship.’ It is not unique to Cambridge – there are similar services in churches around the world – dating back to 1880. However, the Nine Lessons and Carols has become synonymous with Cambridge because of the longstanding popularity of the candle-lit service at King’s College. Appropriate to its Cambridge setting, this is a service filled with tradition.  It always begins with the hymn Once in Royal David’s City. Always the same Nine Lessons are read, and they are always read by a chorister, a choral scholar, a representative of Cambridge churches, a representative of the City of Cambridge, a representative from Eton, the Chaplain, the Director of Music, a fellow of the College, and the Provost of the College. There are always carols sung by the choir, and hymns sung by the congregation and the choir together. The choir is always the world-famous Choir of King’s College, Cambridge. The service always ends with the Hark! The Herald Angels Sing. Who goes? 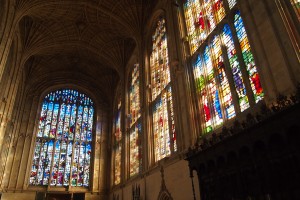 Despite its world-wide significance, the service is attended by members of King’s College and their guests, people from the City of Cambridge, and members of the general public. However, getting a seat is like getting a golden ticket – there are only 650 seats available and queuing officially starts at 7.30am in the morning for a service that begins at 3pm. The Choral Scholars of King’s College usually sing to the queue to entertain people as they wait. Fun facts If you want to listen to the Festival of Nine Lessons and Carols this Christmas, it will be broadcast on BBC World Service live on Tuesday 24th December at 15.00 GMT. And just think, you could be visiting King’s College Chapel next year, during one of our Cambridge summer courses!