Something strange is sweeping Britain at the moment! Temperatures are dropping, people are frantically running round the shops, trees are appearing INSIDE people’s houses, jolly tunes are playing on the radio, and there is a feeling of excitement in the air. It can only mean one thing…CHRISTMAS IS HERE! Like in many parts of the world, Christmas is a major holiday in the UK – for many it the highlight of the cold British winters. Here are some of our favourite things about Christmas, what are yours?! 1. Family time For us Brits, Christmas is the time of year when families get together to catch up and celebrate together. Often people living in different parts of the country will travel so that they can spend Christmas day together. Whether it’s going to church, playing board games, or watching the Queen’s Speech on television, Christmas is a fantastic opportunity to spend time with the people we love and perhaps don’t get to see as often as we’d like during the rest of the year.      2. Snow 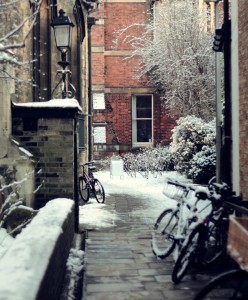 A snowy alley in Cambridge, brrr!

Will it or won’t it? Every year people try to guess whether it will be a ‘white Christmas’ – in other words, whether or not it will snow on Christmas day! In reality it is actually quite rare to have snow on Christmas day but we all get very excited if it does! Even if it doesn’t snow as you can imagine it is very cold. The frost and snow make for some beautiful scenes, especially in Cambridge. But don’t worry, we promise it will have warmed up a little by the summer! 3. FOOD! Family aside, my favourite part of Christmas is most definitely the food! A traditional Christmas dinner consists of a big turkey, stuffing, potatoes, gravy, and vegetables – including the often unpopular brussel sprouts! Nothing wrong with them if you ask me! And if that wasn’t enough we like to finish the meal with a warm mince pie or some Christmas pudding. Delicious! Think about the washing up later… 4. Santa! For many people, one of the most exciting parts of Christmas is Santa’s (or, as we sometimes call him, Father Christmas) visit. This jolly, rounded, bearded man squeezes down the chimney in his red suit, with a sack full of presents for children who have been good during the year! Often families leave out a mince pie for Santa to say thank you, and a carrot for his reindeer Rudolph. 5. Decorations Both inside the home and out on the streets decorations are everywhere at Christmas, 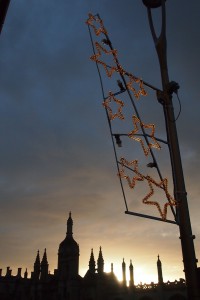 Christmas lights and a Cambridge skyline at sunset – lovely.

adding to that festive feeling! In Cities, towns and villages across the country people decorate the outside of their houses with lights to spread festive cheer among passers-by, and the main streets are also lined with dazzling Christmas lights. Inside the home, a major tradition at this time of year is decorating the Christmas tree with lights, tinsel, beautiful baubles, and a star or a fairy on the top. You never know, there may even be a present or two hiding underneath the branches!   Ahh Christmas, we love you!