After a rather turbulent time for the British monarchy, the last couple of years have seen the royal family become increasingly popular once more. The Queen’s Diamond Jubilee, and the engagement and then wedding of Kate and Wills, brightened up 2011 and 2012. And 2013 saw the birth of our future king, Prince George – born the day after our July international study program ended. There has been plenty to celebrate! The appeal of the younger royals has been particularly important, which is why the city

The Duke and Duchess on their first visit to Cambridge

of Cambridge was absolutely delighted when Queen Elizabeth II’s wedding gift to Prince William and Kate Middleton was the titles of Duke and Duchess of Cambridge. Their five-month old son was affectionately named Baby Cambridge before he was born, and is now officially HRH The Prince of Cambridge. But this is not the first time that Cambridge has been thrust into the limelight through an association with royalty. Ever since William of Normandy built a castle there in 1068, there have been many royal connections. It was only a couple of years ago that Prince Phillip stepped down from his position as Chancellor of the University, a post he had held for 35 years. His son, Prince Charles, joined Trinity College in 1967. He was the first Heir to the Throne ever to get a degree, though 18 princes and princesses, and 10 kings and queens, have studied there. A study trip abroad to Reach Cambridge allows you to live and learn in the same university that has taught and housed royalty! Flicking back through the history books, arguably the most-famous college, King’s 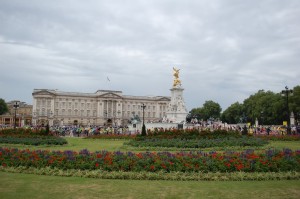 Buckingham Palace, one of the Queen’s official residences

College, was founded by King Henry VI, and King Henry VIII presided over the completion of its chapel, whilst also founding Trinity College. Staunch anti-monarchist Oliver Cromwell, one of the people who signed the death warrant of King Charles I, also attended Cambridge University. After the English Civil War, he replaced the King as 1st Lord Protector of the Commonwealth of England, Scotland and Ireland. He died of illness aged 59, and a few years later, after the monarchy had been re-instated and King Charles II had been crowned, his body was dug up from Westminster Abbey and his head cut off. He is now buried in the grounds of Sidney Sussex College, the college he attended as an undergraduate, but the location of his grave is kept a fiercely-guarded secret to protect it from vengeful monarchists. Most importantly, royals have long appreciated Cambridge for the wonderful place it is. Rumour has it that when Elizabeth I visited the city in 1564, she extended her trip to 6 days because she was having such a good time! So, whether you have blue blood, or are just daddy’s little prince or princess, join one of our summer programs and you’ll feel like royalty!