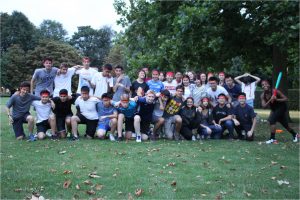 Today has been another fun filled day at Reach! Mock interviews continued to put students through their paces and give them a taster of what interviewing for university in the future will be like. Back by popular demand from yesterday, a momentous game of Capture the Flag rocked the afternoon as teams Fore & Ice, gave all they had to ensure that they won more precious points for Squad Warz.  This was followed by the ‘Fiesta of Fun’ – where different stalls were designed to raise money for Sabre Education. Popular stalls included ‘soak the supervisor’ where students could tip buckets of water over their supervisors! A competitive 5 a-side football tournament included an especially strong performance from the ‘Christ’s girls’ (the only female team), but they sadly lost out to Team Fire. Tonight was the final opportunity for corridor dinner, and the students decided where they wanted to eat as a corridor. It was a wonderful time to reflect on how the program had been progressing and to hear about all the different things that the students were getting to do in their classes. Popular places included Wasabi and McDonald’s, there were many happy faces arriving at the lecture. 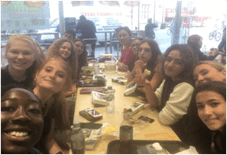 The lecture tonight was about University Applications, and contained information about applying to universities in the UK. Not only were the students exposed to the administrative side of the university applications, but also given more insight into what it is like to be a student in a UK university. The students found this informative and helpful, and it was acted out well by our supervisors! The evening activities consisted of a lip sync battle and the casino – both of these activities provided a fun night to end a busy day! We look forward to the same tomorrow, with the exciting addition of the talent show. Written by Hannah, Supervisor