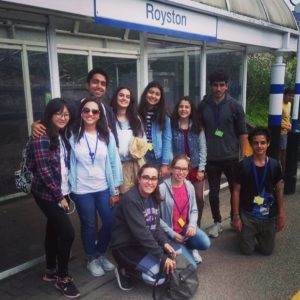 What an eventful day! We started off with the regular breakfast and morning classes. The Biotech class went on a trip to a global provider of laboratory and pharmaceutical equipment based in Royston. These lucky students got to chat to some of employees, and were even invited into a Restricted section in the TAP laboratory, and got to see some bioreactors up close (but not too close; a safe distance..!). Lesson topics in other subjects today included Electromagnetism, Game Theory, and Motivation & Leadership, as well as Personal Statement writing in ESL. In the afternoon, the students had a great time punting themselves along the river Cam, seeing the sights and participating in the #instravaganza challenge. You can see the students’ photos by searching the tag #reachcambridge2017 on Instagram. Winners have yet to be announced, so watch this space… 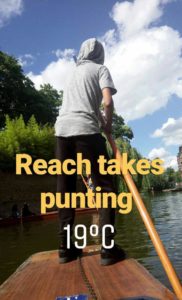 Students trying their hand at punting

Today was also one of the ‘University Advance’ Add-On days, meaning that a couple of students got to visit UCL and Imperial College London to get a taster of what it might be like to be a university student in the capital city. Highlights included chatting to a professional physicist, and meeting famous (and long-dead) philosopher Jeremy Bentham!   In the leadership lecture tonight, students were split into five teams were assigned a leader. Each team elected a speaker and planned a one-minute presentation in defence of the leader they were assigned (those represented included Steve Jobs, Angela Merkel and Beyoncé). A fascinating debate followed, and many lessons were drawn about how to be a good leader.  Of course, one of these lessons was the importance of leading by example: the workshop was run by Scott, our very own Program Co-Director! To round the night off after the amazing leadership lecture was the Reach-famous Ghost Tour. Scaretakers Tim and Amy transformed into ghoulish storytellers for an unusual tour around the streets and colleges of Cambridge, telling spooky local stories which have now become the stuff of legend. There was also a surprise appearance from several ghosts! Or they might have been supervisors wearing black bin liners. It’s hard to be sure… 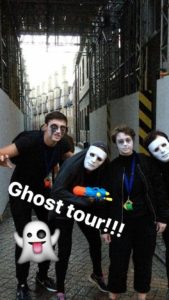