After a fun filled day at Hampton Court and an evening exploring essential university skills, such as revision technique and academic writing, the Reach Cambridge ‘working week’ got under way in style today. However, there were no Monday morning blues as the students experienced their first Leadership session. Negotiation, communication and cooperation was essential as the students, working alongside their fantastic teacher Blaine, developed these skills while working together in groups. After lunch, the students explored the city of Cambridge, taking part in the traditional Reach Cambridge Scavenger Hunt. Armed with a question sheet and a camera, ten teams of students competed to identify as many famous Cambridge landmarks, including some Cambridge Colleges, as possible in 90 minutes. However, rather than merely answering the questions, the students were required to take a team photo in front of each landmark, with some creative and hilarious results! With the results announced later in the week, and with a guaranteed prize for the winner, the scavenger hunt was as competitive as it was fun. While only one team will emerge as the champions, all the groups performed admirably and had a laugh in the process. 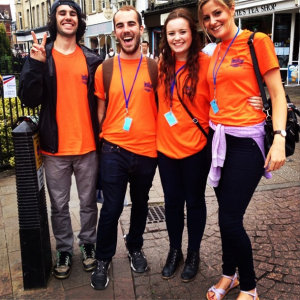 One Reach tradition was followed by another, as the first football game of the Reach season got under way with some amazing goals, spectacular saves and two exhausted out supervisors! The evening was filled with a talk from the SABRE charity, outlining the charity outreach project that all of our Global Leaders participate in. SABRE work with the Ghanaian government to improve the level of early years education, and have received the support of Reach students for the last 5 years. With both organisations celebrating their 10th birthday, students have been set a fundraising target to work towards by the end of the week. Finally, the day was rounded off with some cake decoration and a sing-a-long, a nice way to unwind after a hectic but very productive day! Written by Carl, Supervisor