Last Sunday we took advantage of a beautiful day and journeyed to London. Half of the group explored Tate Modern and took in Macbeth at the Globe Theatre, while the other half enjoyed a morning at Greenwich, followed by a river cruise down the Thames to Southbank in the afternoon. Greenwich and Southbank Group: 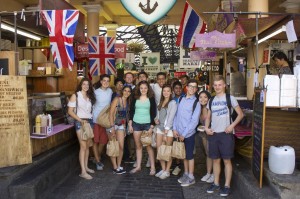 Greenwich was sunny and green when we arrived. The first thing we did was take in the city market, which was filled with foreign foods and unique items.  After this the students scattered into the maritime museum, and enjoyed a picnic in the grassy areas around the Queen’s House. Just before we left, we saw some impressive street performers juggling and doing flips! On the river cruise, we listened to our funny and informative tour guide explain the main 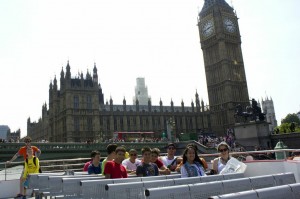 sights along the Thames. On our ride to Westminster some people stayed on the top deck to take in the full view, while others chose to stay cool downstairs. At some point, a game of Charades broke out at the corner table! Our last stop was Southbank, where students explored the local food market which was filled with a variety of tastes from around the world. There was also a fountain filled with people running in and out to combat the heat of the sunny afternoon. By the time we reached the bus we were all exhausted and ready to be back in Cambridge. Tate Modern and Globe Group The Tate Modern museum is famous for its contemporary and unique exhibits.  It is the most visited modern art gallery in the world, with 4.7 million visitors each year. Here we explored some interesting and sometimes strange exhibits, and enjoyed the view from the balcony of the café. Afterwards we ate our packed lunches and headed to the Globe theatre to see Shakespeare’s famous play, Macbeth. The Globe is set up the same way it was it Shakespeare’s era, with an open area in front of the stage for general admission. This allowed the students to get a historical experience, and allowed the actors to get involved with the audience and surrounding environment. Actors would often appear at different places in the audience, especially in the more expensive seats where the “gentry” sat in Shakespeare’s time. At one point, an actor even pulled the audience into the show, demanding a student in front row to kneel! In the final monologue, a bird flew by randomly but was also inserted into the drama.  A very exciting surprise for the students was the identity of one of the actors, who also played Pippin in Lord of the Rings! Heather