Anglesey Abbey – An escape from the city

Anglesey Abbey - An escape from the city 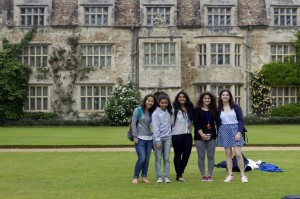 A few miles outside of Cambridge lies Anglesey Abbey. Originally built as a priory in the twelfth century, it has since been converted by the Fairhavens (a wealthy American family in the early twentieth century) into a stunning country house bordered by pretty gardens. The estate provided the students with a welcome retreat from the bustle of Cambridge city centre and the busy schedule of lessons and activities. Once we had arrived, we split up into groups, with some heading straight to the house to discover its many hidden treasures and other taking to the large lawn in front of the house to play football, Frisbee and American football as well as making the most of the opportunity to sit down, chill out and admire the beautiful house and the lush surrounding scenery. As we explored the house, many of us were struck by the variety of fascinating items acquired by Lord Fairhaven during his lifetime. There were many attractive paintings, particularly of the races at Newmarket, as Lord Fairhaven was passionate about horse-racing, as well as a selection of paintings of Windsor Castle, as the Fairhavens were friendly with the Royal family. Indeed, a couple times, the Queen herself has stayed the night at Anglesey Abbey and we were shown the bed she slept in and, intriguingly, a windowpane in the library that she had signed using the sharpened edge of a diamond! Among other interesting items was a book in the library that had no pages inside it but was in fact a secret box for hiding jewellery in, a glass case full of huge bejewelled crucifixes of all shapes and colours imaginable and a gorgeous walnut Steinway piano custom made for Lady Fairhaven. Some students were even treated to a performance on this majestic instrument by the resident pianist. All in all, everybody had a great afternoon at Anglesey Abbey as there was something for everybody. Those less interested in the house could enjoy the fresh air and open spaces for playing sport and for others the house was a treasure-trove that captivated the imagination. Jon S