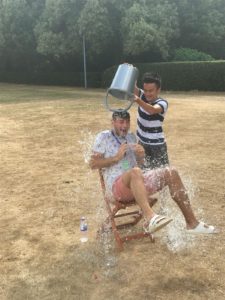 The penultimate day of the program was full of some wonderful tunes and sights. Classes brought with them new and exciting opportunities to get out of the classroom. The Psychology class made their way to the escape rooms, racing against the clock and each other to gain a prize as well as overall bragging rights. Meanwhile the Computer Science class competed to create mazes, they put all they had learned over the last week and a half into practice. After a refreshing break, the students descended on the Downing Paddock for the program’s second and final round of Community Outreach activities. Our brilliant Community Outreach students set out an array of challenges and games to create the Fete-of-Fun. Here students were able to soak their favourite supervisors, in the name of charity, while also watching or participating in the re-scheduled five-a-side football tournament. It wouldn’t be a British summer without some rain. Luckily, today the sun stayed in its place and the football went ahead as scheduled. Only one team could emerge victorious, and it was Team Timmy that took home the cup. Our final lecture of the program was one of our best. Our Director of Operations, Kate, provided the students with an insight into her academic background in Social Psychology, and challenged the students to think about Social Stereotyping and Cross-Cultural Studies. After this, the winner of College Warz was announced – and Team Trinity Hall too home the gold. Their rewards were waiting for them on their corridor when they returned to their college. Despite the cross-college competition, the extent of the Reach community was truly demonstrated at the Reach Cambridge Talent Show. Some beautiful singing and some exceptional dancing graced the stage. The level of support that the students showed each other tonight was exceptional and the supervisor team were beyond proud.