We were glad to see the sun back out and shining for this fun-filled Friday after a couple of grey days here in Cambridge! As usual our day kicked off with a diverse range of engaging classes. The English as a Second Language Class had a particularly fun morning taking on the role of film critics. They watched, reviewed and then discussed the film Gandhi (1982) which follows the inspiring life story of the Indian activist. A highlight pointed out by a few of the students in their reviews, was Gandhi’s peace speech. Elsewhere, the topics of study ranged from gravity in the Physics and Astronomy class, to prosocial behaviour in the Psychology class. 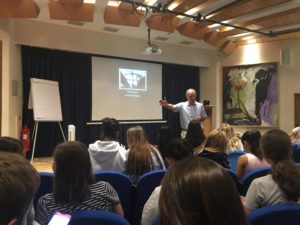 Following  on from some free time to grab lunch, there were two different activities on offer this afternoon. Some opted to play some sports on Downing Paddock, basketball was today’s sport of choice, while  others worked on their World Fair presentations ready for the evening. There were a significant amount of PowerPoint presentations created, as well as video filming and music selection. It was very nice to see such great teamwork, as students who had not known each other prior to the program,  worked very hard together, in order to meet the 5pm deadline. Lots of fun was also seen to be had at the Creative Writing add-on. Creative juices were definitely flowing as students worked both inside and outside on stories that they had previously written, some also came up with entirely original ones today! This evening’s dinner was of a particularly special kind, – corridor dinner. These were arranged for the students on each corridor by their supervisors. They are special because they allow everyone living on the same corridor  to enjoy dinner together, giving them time to bond and reflect on the activities from the entire week and those that are still to come. The different corridors went to eat at a variety of places. A popular example for today was the Cambridge student hotspot, Nanna Mexico, famous for its burritos! The girls staying at Trinity Hall teamed up for a mega- corridor dinner at Bella Italia. Most had pasta for their main meal, in addition to a delicious raspberry sorbet for dessert! 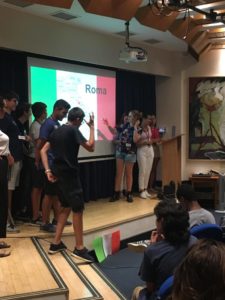 After filling up at dinner, everyone headed back to Trinity Hall for a riveting lecture on a ‘Life of Flying.’ Students were spoken to by retired pilot, Tony Evans, who described his extensive career, flying all over the world ranging from serving his country, to working for a commercial airline and for the police. To end the day everyone attended the highly anticipated World Fair. This provided students with the opportunity to teach their peers about the country that they come from and even to share some samples of traditional foods. The excellent presentations were very interactive, some taught the audience important phrases in the native language of their country, others created a quiz and there was even a rap! These countries included Italy, Spain, the Philippines, Saudi Arabia, Canada, England and Wales. There was great representation from a very diverse range of countries reflecting how our students have travelled from all over the world to be here with us.