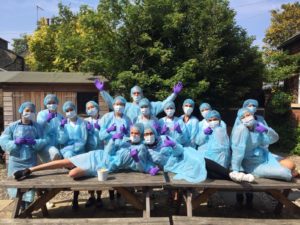 Today students went to class as normal, and the students from Medicine and Life sciences went across to a new classroom near Reach Hall, where they were able to perform exciting dissections and experiments! The students from Physics and Astronomy also went on a trip to Centre for Computer History, where they played Tetris on the largest processor in the world and played lots of retro games. Exhibits included computers from several decades, which they all got to play on! Students also learnt a lot about the history of computing development: they saw the first computers and why they developed into the computers we see today. It was especially interesting to find out about the large number of women involved in building the earliest computers, which we don’t often hear much about! During lunch, a group of students chose to go and have a tour around Pembroke College, with two of our supervisors who are current Pembroke College students. This was part of the university-wide open day, and they received subject specific information from current students and were able to look around another college – this is useful for those thinking about applying to Cambridge! 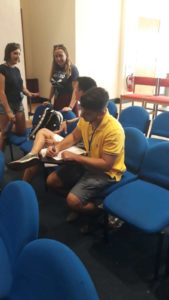 Later in the afternoon, after a lunch break, students gathered in the Trinity Hall lecture theatre to partake in a workshop on public speaking. Students split up into groups and completed various activities. Despite the heat, they were eager participants and gained skills which are sure to be valuable on their CVs/resumes. Dinner this evening was led by corridor supervisors, who organised various meals such as pizzas and burritos for the students on their corridors. Dinner was eaten outside on Christ’s Pieces and Downing Paddock, and was followed by ‘corridor bonding’. A film was screened, as well as the Brazil-Belgium football match. After corridor bonding, students went to bed so as to be up fresh and early for our first weekend excursion to Stratford-Upon-Avon and Warwick Castle tomorrow!

© Copyright Reach Cambridge Ltd. All rights reserved.
Privacy Policy – Terms & Conditions – Legal Disclaimers
Reach Cambridge is not affiliated to the University of Cambridge or its constituent colleges.
Apply before 15th November to save £400
APPLY NOW

Or to find out more, please contact us or register for a free Reach Cambridge webinar. The next available dates and times are as follows: