We have only four jam-packed days left of what has been a wonderful time at Reach Cambridge. Classes were once again busy with exciting activities including the Medical Sciences and Chemistry students getting gloved up and synthesising antibiotics from aspirin and then testing them on live bacteria!     Meanwhile, the computer science students went on a field trip to the UK computer museum and got nostalgic with some seriously old-school tech. Alongside in-depth coding activities, there was also some free time for students and supervisors to enjoy their favourite childhood games including Pacman, Guitar Hero and Sonic the Hedgehog. After raising a whopping £1,000 for the Sabre Charitable Trust last night, the Reach students (and supervisors) began their auction fulfillments. One of the highest bids of last night’s auction was a tour and lunch at one of Cambridge University’s thirty-one colleges. After classes, two Reach supervisors took a group of five students to the neighbouring Queens’ College, one of the oldest and largest colleges of the university. The students were able to walk on the famous Mathematical Bridge that crosses the River Cam, and excitedly took pictures walking on the grass of the Fellows’ Garden, just in front of the Erasmus building, which won an architecture award in the 1970s. Afterwards, the group enjoyed a real college experience as they ate in the dining hall, commonly called the Buttery by Queens’ students. 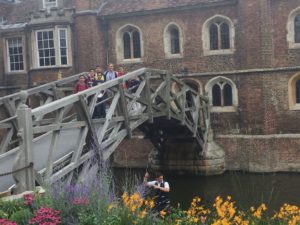 Following lunch, the students attended an afternoon workshop, given by a representative from Sabre, the aforementioned charity organisation that Reach supports. Our young people learned about the pressing issues of education in Ghana and other parts of Africa, especially the lack of resources and infrastructure and under-qualified teachers. Students had the chance to hear about all the amazing things that Sabre is doing to combat these challenges, and how the money they have raised will be contributing to building schools in Ghana or training Ghanaian teachers. After hearing about how Sabre operates, students were split into teams and worked together to come up with their own ideas for charity campaigns, which included a fun run, mobile app and a ‘munchies and music’ festival.

We had a fab time @ReachCambridge yesterday. The students rose to the challenge and presented amazing fundraising ideas #ReachCambridge2017 pic.twitter.com/zfMXSwUsx7

After the great success of the last Wednesday’s disco, students returned to the dancefloor for the summer schools disco at Ballare! Those who preferred a less dance-intensive evening enjoyed a choir session led by supervisor Will. Students met up with other students from local summer schools and partied away. This was followed by an early night in preparation for an early start tomorrow for the trip to London! ~ by James (Supervisor) and Sophia (Welfare Director)