Today has been all about raising money for our partner charity, Sabre – and having lots of fun along the way. The afternoon kicked off (literally) with some 7-a-side football. Then the brave took part in the innovative obstacle-dress-up-egg-and-spoon race to win chocolate prizes. We fought through the rain to play the classic fete game, Welly Wanging (where, of course, you throw a wellington boot as far as you can). The finale came with the ever-popular chance to ‘Soak a Supervisor’. The students could donate money to charity in order to throw a water balloon, wet sponge, or even a whole bucket of cold water over the heads of their chosen supervisor. Some supervisors were doused with multiple buckets! The rain didn’t seem so bad after that.

This evening, we had two more charity events. The Fete of Fun went indoors, tempting people to join in with catching hanging doughnuts, getting glitter tattoos, face-painting, cake decorating, and eating plenty of sweets. With all that sugary energy and body art, students then took part in an intense charity promises auction. This is where students sell a promise – such as a lesson in Italian, in how to dance, or bringing someone breakfast in bed – and the others fight to win the bid. All money goes to Sabre, and the promises will be fulfilled in the remaining days of the program. Popular items in this auction included a hug, choosing which song would be sung in the talent show, and a bright orange Reach supervisor t-shirt, signed by all the staff! 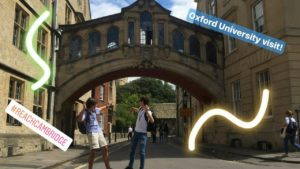 We managed to fit in a lot alongside all these Sabre activities. The Biotechnology and Medicine routes had the amazing opportunity to spend the day on a practical project which involved examining their own DNA (see gallery below). The Creative Writing add-on had their first class this afternoon too, while University Advance went on the second of their two trips; this couple of students returned from their trip to see Cambridge’s rival, Oxford University. The trip has given them plenty to think about when considering coming to England for their undergraduate degrees. Preparations are also beginning for the Talent Show at the end of this week, which we are all getting very excited about.