The penultimate day of Reach was action-packed; classes in the morning included delving into the mental habits of happiness in Psychology, and questioning what freedom means in 20th-Century Britain in the Politics & International Relations class. In Life Sciences & Medicine, students got into some problem-based learning, exploring clinical scenarios, and in English Literature & Performance, the class went punting, drawing creative inspiration from the multitude of colleges on the River Cam. 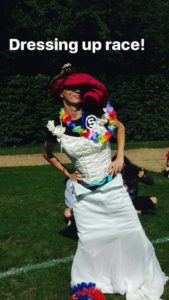 In the afternoon, things got competitive with Reach Cambridge’s very own Sports Day! Categories included included a speedy dress-up race, a classic relay race, and even the idiosyncratic ‘Welly Wanging’, an old English tradition which involves throwing a rubber boot as far as you can. Students competed for much sought-after prizes such as chocolate, as well as eternal glory, of course. Others students took the opportunity to fulfil their auction prizes. The lucky group who won the ‘The Full Nando’s Experience’ were taken to Nando’s by Emily and Hannah and participated in the dastardly ‘Wing Roulette’, while others enjoyed a personal punting tour of the famous college Backs.
In the evening, one of the supervisors on our sister-program ‘Reach Study Abroad’, Petra, treated everyone to a lecture on archeology. She explained how she fell in love with the subject, showing off the many excavations she has done and her findings. Students were captivated by the subject, intrigued to find out what you can learn about a society just from a few artefacts.
After the lecture, the Reach Talent Show took place! Acts included an, um, unique dance routine to Taylor Swift’s ‘Shake It Off’ done by the supervisors, with iconic supervisor Fergus dressing up as Taylor herself! Other students showed off their talent, with beautiful renditions of classic songs such as “Hallelujah’ performed. 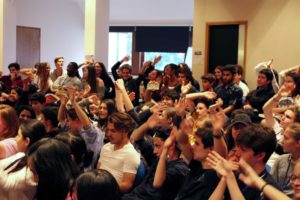 We can’t believe this time tomorrow we will be giving our students a grand send-off at the Departure Party. Where has the time gone?!
~by Zach, Supervisor
SaveSave SaveSave