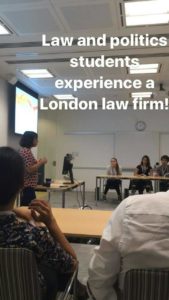 Today was off to a dynamic start, with the Physics and Engineering class getting the opportunity to build and launch their very own rockets (see video below)! The Law and Politics classes also got to venture into London on a day trip, where they visited a top City law firm. The firm was so big it even included an on-site GP, dentist, fitness coach, beautician and at-your-desk massage service. I think I know where the future lawyers from the Reach program will want to apply… The afternoon gave the students the chance to unleash their creative flair. Some prepared for the evening activity, the World Fair, putting together presentations and stalls about their countries and cultures. At the same time, the Community Outreach team began preparations for their main fundraising event, Sabre Day. They developed a marketing strategy and decorated cakes to sell to the public tomorrow. It required some serious willpower for students to resist the delicious icing, sprinkles, chocolate buttons and marshmallows used in the decorating process, so the sale is set to be a hit, as long as the cakes don’t mysteriously disappear during the night… 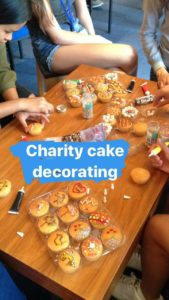 The more academically inclined students got a grilling from their supervisors and teachers this afternoon in university-style mock interviews. Students were asked to prepare a personal statement (follow their workshop on last week) and given an academic interview for a subject of their choice, followed by feedback on their performance. Students were hoping their supervisors wouldn’t be too hard on them, but they have since reported that their two interviewers typically fell into ‘good cop/bad cop’ roles, with varying opinions about which cop dominated! The evening lecture covered the controversial topic of Brexit, something quite topical on such an international program hosted here in England. The guest speaker, a British journalist, discussed the main causes of Brexit and a prognosis for what an independent Great Britain might look like. The students got involved by asking lots of questions, especially regarding applying to university in the UK, which could be set to get more expensive for EU citizens. 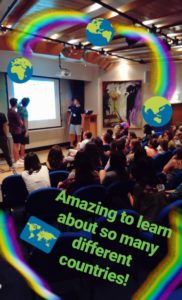 World Fair in full swing (from our Instagram Story @reachcambridge)

All the afternoon preparations came to fruition in the evening with the World Fair. Our illustrious host, Lord Joffrey Huntingdon-Smyth (also known as supervisor Fergus with a wig), gave an insight to some of the quirks and curiosities of Great Britain. No British presenting would be complete without some terrible word-play, and it’s safe to say Lord Joffrey took this cheesiness to a new – rather literal – level, with multiple cheese-themed jokes.

What cheese surrounds a castle? Moat-zarella!

Luckily for all involved, Joffrey wasn’t the only speaker to hit the stage! Students from all around the globe introduced us to their countries, taking us on a journey from the Bahamas, to Indonesia, the USA, Canada and Turkey. After this exhilarating round-the-world-trip, the students hit the hay in preparation for their penultimate day of classes and activities, as well as the excitement of Sabre Day.