The first weekend of Program 1 meant it was the first time the students got to experience Reach Cambridge excursions. Here’s a little flavour of what they got up to… 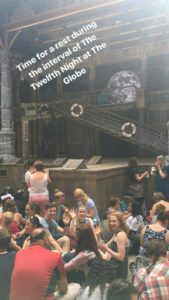 On Saturday, some of the students chose to visit both the Tate Modern and the Globe Theatre. At the Tate, students had a couple of hours to explore the best modern art that Britain has to offer, including installations of Andy Warhol’s work and Giacometti’s surreal sculptures. After a further exploration of the South Bank, the students then attended the Globe theatre’s production of Twelfth Night. Whilst Emma Rice, the artistic director of the Globe, is leaving after a short term, her adaptation of Twelfth Night has proved hugely popular, and the students weren’t disappointed! As in the original Globe, the students and staff stood in the Yard for all three hours of the play, but sore feet were quickly forgotten as cast members put on an unforgettable and colourful show. Featuring the original Shakespearian language juxtaposed with 70s classics such as ‘We are Family’, and narrated by a bedazzled drag queen, the production was hugely fun and full of joy and comedy. Those students who were not on the Globe trip opted instead to explore Greenwich and enjoy a River Cruise down the famous Thames. This was a great chance to relax and see all the sights from an unusual vantage-point. Greenwich is a lovely area of London, where students can enjoy straddling the Greenwich Meantime line, the boundary which determines the GMT timezone.

On Sunday the students got the chance to visit Brighton, one of Britain’s most popular seaside resorts. A sun-filled, fun-filled day was had by all, despite the presence of some pretty rowdy seagulls who attempted to steal people’s food! The group – and the day – was split into two, which gave students the opportunity to enjoy amusements and engage in cultural activities. One group began the day at Brighton Museum and Art Gallery, where they got to see the eclectic collection of artefacts, art and costume which make up a range of unique displays. Students particularly enjoyed the puppetry section, which featured a giant and impressive ‘Genie Mask’ from the 1933 avant-garde ballet ‘Fastes’. The Genie’s gawping face was something to behold! 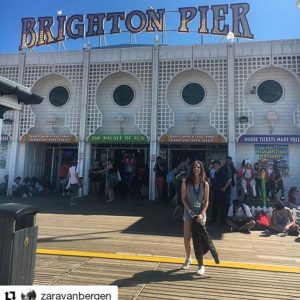 Students then had lunch in the gardens surrounding the opulent Brighton Pavilion, and got a taste of Brighton’s happening music scene when a merry bare-footed flute player and lively Ghanaian drummer began playing nearby. The groups then swapped over, and the first had the chance to explore Brighton pier. The pier, stretching out over 500m into the glistening blue Atlantic (and, unusually, it was both glistening and bright blue on Sunday) is loaded with fairground rides, ice cream stalls and arcade games. The students really enjoyed thrill seeking on the ‘Turbocoaster’ and the ‘Galaxia’, or chilling out with a soft-whip ice cream on the stony shore. After the coach journey home, students got the chance to unwind during dinner back in Cambridge, and many were seen lounging about on Trinity Hall’s Latham lawn as the sun set. ~by Ella (Supervisor) and Amy (Welfare Coordinator)