After the slightly worrying rumbling of thunder, day four of Reach blessed us with another beautiful day! With the summer school now getting into the swing of things, students enjoyed a multitude of intriguing subjects – everything from modernism and its difficulties in English Literature & Performance to the intricacies of legislation & litigation in the Law class. In Life Sciences & Medicine, the students got up close and personal with science, extracting DNA from a strawberry during a practical. The DNA separated in the form of a white fibrous substance, appearing to be much like candy floss! 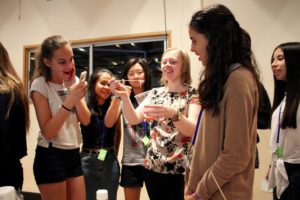 After students ventured into the city centre to grab lunch, they were treated to the option between two varying yet equally fun afternoon activities. For those who weren’t too tired-out from boogying at the disco last night, a exhilarating game of Capture the Flag took place in Downing College’s sweeping Paddock. This involved running to seize flags from the opposing team’s lair, whilst defending their own flags. This showed off the swiftness and amazing agility of both students and supervisors alike! Those who didn’t want the intenseness of capture the flag enjoyed a range of sports, from volleyball to frisbee.
On the other side of town, Amy took a group of students to the illustrious Fitzwilliam Museum for a peaceful afternoon of art. Not only did this show to be a much-needed respite from the heat and bustle of the city centre, but the students got to see an exceptional collection of sculptures and paintings from antiquity. After having a wander around, students settled down to sketch the works found in the museum, as well as numerous portraits of supervisor Amy herself! After both activities, lots of students treated themselves to ice-creams – thoroughly deserved after a busy day of hard work! 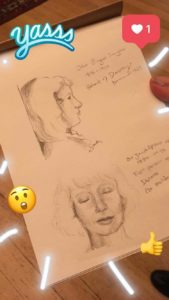 Tonight’s lecture treated us to a demonstration of music production from a professional in his field, Andrew Simmons. Andrew has worked a lot in advertisement and film, with everyone probably having heard his music in a recent Toyota advert! Students even joined in in producing a full soundtrack for an advert; this included claps, snaps of fingers and keyboard playing.
After the lecture, students had the opportunity to attend a university Q&A session, hearing from Reach supervisors who are current studying at Cambridge, learning about Cambridge and university life as a whole. Elsewhere in Trinity Hall, Matt and Tomini led an enjoyable quiz, with nuggets of trivial information about staff revealed (such as that Katie was once in a  play with Nick Clegg); other light-hearted activities were run such as fishing for vegetables! Students will need their beauty sleep tonight in preparation for the long-awaited Reach photo tomorrow…