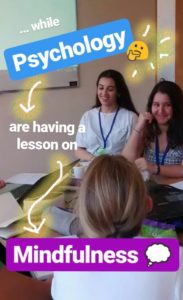 After another large breakfast to fuel the day, the students confidently made their own way to class, having familiarised themselves with the streets of Cambridge. A range of exciting lessons awaited them, including special relativity in Physics and mindfulness in Psychology. In English Literature, the class acted out a scene from Shakespeare’s Twelfth Night, in preparation for their trip to the Globe Theatre later in the week. After class, we made the most of the rare British sunshine and all headed to Jesus Green for a big Reach picnic. There were frisbees, footballs and fun! This was a great opportunity for the students to make new friends, teaching one another their favourite sports, or making up new games entirely!  Later in the afternoon, the school split in half and took it in turns to head off on a punting adventure down the River Cam. We witnessed minor chaos on the water. There were collisions between boats, students punting backwards and others running head on into willow trees! Thankfully, everyone made it back safe and dry, with funny stories to exchange of their near-fallings-in.  (See video evidence below!*) To round off the day, the students headed out into Cambridge to find somewhere tasty to eat, before the night’s big events. For those who wished to party, there was a Summer School Disco in what is usually one of Cambridge’s premier nightclubs, which was instead taken over by students from different summer schools, chart hits and a lot of fruit juice! Supervisors and students alike danced under brightly coloured lights, cracking out some smooth moves on the dancefloor. There were ‘worms’, ‘robots’ and a host of improvised styles in between! Meanwhile, in Trinity Hall there were similarly impressive moves being made on the Wii and SingStar, as students competed for gaming glory. After such an action-packed day, the students are all ready for a good night’s sleep, so they can be up and ready to start the fun again tomorrow.