After a big breakfast, the students headed off for their first day of classes. Classes today were – as usual – varied and unique.  In Law class, the students learnt about the legal aspects of the Harry Potter universe, making it clear that wizards need laws too! During physics class, the students were asked to build their own catapults, using what theory they’d learned in class to fling balls as far as possible. After classes, the students were able to set out into town and find themselves some lunch, exploring the streets and food of Cambridge with new friends. Once lunch was over, the students had the chance to get involved with the afternoon activities. On offer was drama and sport. There was a great turnout! In sport the students got involved in football and frisbee – there was even an impromptu supervisors vs students match (the supervisors won …). In drama, students started with warm up games – including improvising as a vampiric party guest! Afterwards, they recreated musical scenes from the Sound of Music, with some impressive solos. 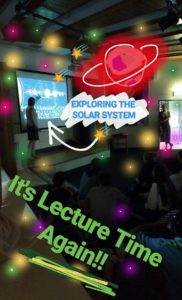 The evening lecture today was on Astrophysics, with a researcher from Cambridge University talking the students through a journey across our solar system. From possibly habitable moons of Saturn to the freezing atmosphere on Mars, we were shown the natures and potential of the planets in our solar system. The lecture not only looked at the planets themselves, but at the future possibility of human exploration of planets and what current robotic exploration entails. Particularly considering Mars, we were shown how current and planned projects are attempting not only to examine the atmosphere of the planet, but discover if there is or has been life on it. There were definitely a few students ready to send themselves off to Mars … Our last activity of the day was Squad Wars! Students were put into groups and taken through a game-show/quiz/physical challenge extravaganza! They had to guess the names of songs, answer geography questions and match baby photos to current Reach staff. A highlight was the ‘Great British Sandwich Making’ challenge, where students were blindfolded and had to make as many jam sandwiches as possible (see video below!). The highest number was an amazing 10, and we are all eagerly awaiting the final result … All in all, it was another jam-packed and exciting day at Reach. It’s hard to believe that we’ve only been here for a couple of days, and that there is so much yet to come!   ~by Amy, Welfare Coordinator (recent graduate in Sociology from King’s College, Cambridge)