Reach Cambridge around the world: trip to Turkey

Reach Cambridge around the world: trip to Turkey

One of the greatest things about the Reach Cambridge summer programs is meeting people from all over the world. Now I work for Reach Cambridge throughout the year, I also get the chance to travel world, telling people how brilliant our residential summer schools are! 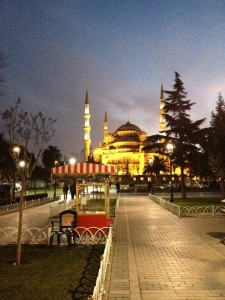 The Sultan Ahmed Mosque, also known as the Blue Mosque.

My first trip was in January, and a colleague and I went to Turkey. I had never been before, so was very excited to visit. Travelling to Turkey for work meant that we also got the chance to meet real people, as we went into schools to chat about our international study programs. It meant we experienced the country a bit more as a local than as a tourist. Saying that, we made sure to visit lots of tourist spots as well, to make sure we soaked up much the history and culture. 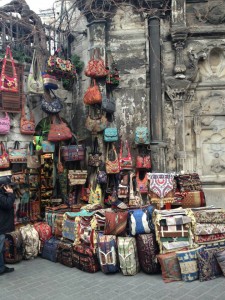 A stall outside the entrance to the bazaar, in Istanbul, Turkey.

We spent our first few days in Istanbul, which is probably the most well-known place in Turkey. It’s the largest Turkish city, but not its capital (that is Ankara). I had no idea what to expect, but driving into the city from the airport at night was beautiful – Istanbul has lots of hills covered by buildings with twinkly lights, and we had to cross a huge bridge to get to Taksim where we were staying. The bridge crosses the Bosphorus, which divides the two sides of Istanbul – the European side and the Asian side. On our first morning we got a ferry along with all the other commuters across the water, which was a lovely way to start the day. There were lots of amazing things about Istanbul. There are really cute cats and dogs everywhere (we made friends with a cat we called Jeremy). The centre is always filled with people, even late at night, so there is a great atmosphere. We went in January, and there were still lots of Christmas decorations up. There are lots of great places to eat kebabs. We visited the breathtaking Sultan Ahmed Mosque, nicknamed the Blue Mosque because of the blue tiles on the interior. We checked out the bazaar, which was a complete dream – an indoor market with streets and streets of stalls to get lost in. 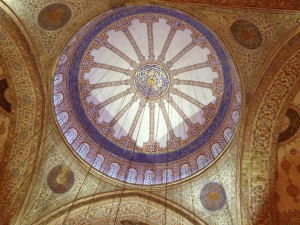 The breathtaking view inside the Blue Mosque.

After Istanbul, we went to Ankara. It’s quite different from Istanbul – it’s away from the coast, and is a business hub, so there weren’t any tourists. This made our visit to some Turkish baths amazing – it was really traditional and was only used by real Turkish women, which meant the prices were really cheap! The building was very old with beautiful ceilings that had star-shaped holes to see the sky. Everyone we met, from schoolteachers to school pupils, taxi drivers to hotel staff, was absolutely lovely, and we didn’t want to come home!