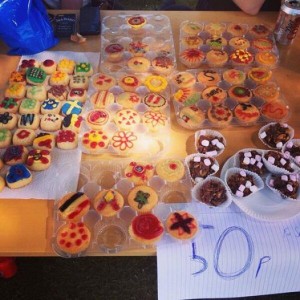 Monday brought sunshine, bicycles, a field of fun and a miniature world cup tournament. The day started off with the tour de France zooming through Cambridge, the cyclists passing through the cobbled streets in a blur of colour. The atmosphere was incredible and it was clear that the students were as excited as the crowd that lined the streets. The fun continued into the afternoon (who said Mondays are no fun?) with a “fete of fun”; a field full of activities. Apple bobbing proved popular, with each student getting steadily wetter, with other students attempting to guess the name of the Reach 10th anniversary bear or how many sweets had been crammed into one jar. 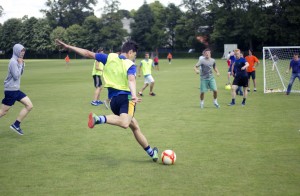 The community outreach crew soon descended upon the fete of fun with the delights of football or “soccer” and refreshments for those both playing and watching the teams battle it out on the pitch. An incredible team of four community outreach students did a truly amazing job organising an event that could have proved messy and challenging but instead ran smoothly, with everyone involved thoroughly enjoying themselves. All the supervisors felt a swell of pride as the four students maintained a high level of professionalism, navigating the playing fields as though they had organised a thousand charity events before this one. The football skills were equally as impressive, each game was closer and more intense, boys and girls alike demonstrating their athletic prowess. 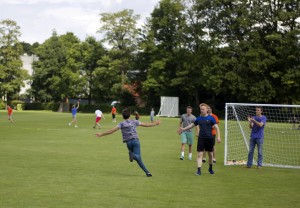 The tournament heated up, the final was fast approaching and the teams became increasingly competitive and tactical. Teams switched seamlessly from playing field to playing field, to the credit of the organisational skills of the four students. In a tense final between India and Greece, more gripping than any of the games played in the World Cup, the Greek team triumphed with an impressive final score. The tournament raised £250 for SABRE, the charity that Reach works closely with, an impressive sum that will help build a safe learning environment for the children of Africa. The community outreach students did a fantastic job – the tournament was flawless and the money raised was greater than the sum we had anticipated. After a well-earned dinner, the students headed to a quiz like no other. Organised by the supervisors, the quiz was pure silliness. Students laughed hysterically as they buttered as much bread as they could in just 1 minute blindfolded, whilst others raced to mummify a team mate with tissue paper and other team members volunteered to go “vegetable fishing”. The most prominent and consistent part of the evening: the bursts of laughter that echoed around the room at regular intervals. The quiz finished with a “guess the supervisor” round; teams had to guess which supervisor was hidden in each picture. The mystery as to who won the quiz still remains and so I shall leave you with the ominous words: to be continued… Written by Lauren Robertson, Supervisor