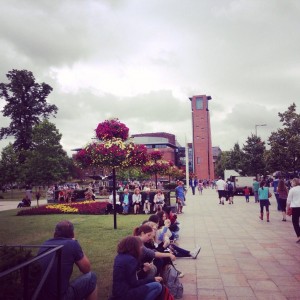 Saturday After a packed first week the Reach Train-of-Fun did not slow as it trundled into Saturday, and the first trip of the weekend. The students began their day bright and early and by 11am we had arrived at Stratford-upon-Avon, the birthplace of William Shakespeare and home to the Royal Shakespeare Company. Despite initial warnings that the dreaded rain would return the weather remained dry, allowing the students to explore the idyllic town including a visit to the birthplace of Shakespeare himself, and the chance to devour traditional British teas and cakes. In the afternoon we split into two groups, one remaining in Stratford to see performances of Henry IV and The Roaring Girl, the other heading off on a trip to Warwick Castle. I got the chance to see The Roaring Girl, a play which despite its twisting plot kept the audience entertained throughout by the use of much physical comedy, dance routines, and even the surprise addition of a Beyoncé song at the end. Those who visited Warwick castle were greeted by the impressive vistas of the eight hundred year-old turrets and walls, along with soaring birds of prey, jousting, and several “authentic” knights and blacksmiths dotted across the grounds. Written by Pete Allen, Supervisor Sunday The first excursion to London was a roaring success. While some students went on a beautiful river cruise tour of Greenwich, the rest of us experienced Shakespeare in his own original Globe! Once we got over the shock of having to stand up for three hours the trip was amazing. Seeing one of Shakespeare’s classics (Anthony and Cleopatra) performed by incredible actors and actresses is an experience in itself, but to do so in the pit just as it would have been in Shakespearian times was incredible. The language was a difficult to keep up with but the actors and actresses delivered the lines with such skill and conviction that the story line was not only accessible but gripping, capturing our attention from beginning to end. Before the play we got the opportunity to have a wander around the Southbank and to visit the Tate museum home to many well-known modern artists. Although it was a bit of a struggle to find the art at the start- with it being hidden upstairs for only the worthy to discover- the museum offered a fantastic opportunity to see modern art at its finest. The day was topped off with cupcake decorating in the evening for the cake sale in support of sabre. The designs were creative and delicious and were much appreciated the next day! After a very enjoyable week and an action packed weekend we are all very excited to welcome the second week at Reach Cambridge starting with the Tour De France parade on Monday! Written by Robyn Borland, Head of Pastoral Care