Day One: Reach Cambridge gets off to a flying start

Day One: Reach Cambridge gets off to a flying start 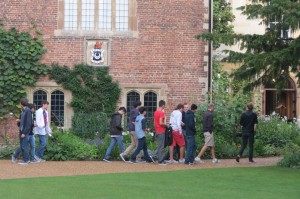 Today was the first day of the Reach Cambridge Summer School and it set the tone for what looks set to be a fantastic 3 weeks! It began with battling through the jet lag (and sadly disappointment too for many of the Greek football fans!) to make it to breakfast, before the students headed to their first ever classes! Having talked to some of the students afterwards it seemed that they had thoroughly enjoyed them and looked forward to getting stuck into the rest of the course- this was a good sign and great to see because I don’t remember 4 hours of morning lectures always having the same effect on myself at their age! Having finished classes the students headed back to their colleges for guided tours throughout the city of Cambridge with time for them to grab a bite to eat for lunch. This brief tour gave them a general layout of the city before they took part in a “Scavenger Hunt” across Cambridge. This allowed the students to explore the city as they worked together within their teams to try and decipher the clues provided, which led them to some of the most famous sights in Cambridge. Each team was equipped with a disposable camera and had to take a team photo at each location- extra points were awarded for funny and imaginative photos, which led to some very creative poses! (We are eagerly awaiting the photos to be developed, and some of these photos will be uploaded onto the blog very soon). Most importantly, all the teams seemed to be having a great time and all of the students (who come from a variety of international backgrounds) now have a much better grasp of the city that will be their home for the next three weeks. In the evening a representative from the charity SABRE, which seeks to improve education and schooling in Ghana, came in to give a lecture to the students on the fantastic work that SABRE has been doing. Reach Cambridge is very proud to be affiliated with SABRE (both organizations are celebrating their 10th year anniversary this year) with many of the students on the Reach Cambridge summer school participating in the community outreach, whereby they will be coming up with innovative fundraising ideas for this worthwhile cause. Moreover, the lecture provided a valuable insight into the global issue of inequality. The international aspect of Reach Cambridge is a central part of the summer program and the community outreach collaboration with SABRE helps to demonstrate the importance of such global issues that affect us all as part of the international community.  It was great to see the students raising some very thoughtful questions after the lecture, which indicated their interest in the topic and displayed their impressive engagement with important issues. Following the lecture everyone headed over to one of the parks in Cambridge to play some “ice-breaker” games in the evening sun (yes, sun!). This provided an opportunity for everyone to play some silly games as a way of getting to know each other better. This resulted in much amusement for the students and supervisors alike as everyone got involved in various activities from balloon games to group quizzes. It was fantastic to see the students so enthusiastic in their participation as new friendships continued to form. This provided a brilliant end to what had been a long but successful first day, and I think that as everyone headed back to their respective colleges, both the staff and students were ready for a well-earned rest! With this fantastic bunch of students it is already clear at the end of day one that Reach Cambridge summer school looks set for a wonderful three weeks! Written by Sam Rylands, Supervisor