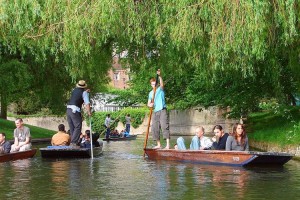 Cambridge’s English Literature course took the literature itself and, for the first time, considered it worthy of study in its own right. It also began to compare English literature with other European literature. Importantly, it also decided to include modern literature, meaning T.S. Eliot and D. H. Lawrence were studied for the first time. What other summer camp for teenagers can offer not only quality teaching on an excellent English Literature course, but in the city which helped the subject to develop? Many influential lecturers at the university shaped how English Literature was to be studied, including: I.A. Richards In the 1920s, Richards developed the discipline of practical criticism with his students. He gave them poems without any further details or context, and asked that they think only about the words on the page. He hoped this would encourage a clearer analysis of the text by removing preconceived notions, and allowing the poems to speak for themselves. It sometimes led to funny responses – Richards would give his students poems by very famous British poets, and, unaware, they would often declare them complete rubbish. However, this approach was very influential, and all students of English Literature at Cambridge University have practical criticism classes. William Empson Empson was a student of Richards, and was very influenced by practical criticism. As the students all had such different responses to the poems Richards presented them with, Empson began to study how poems can have complicated and varied meanings. This in turn influenced New Criticism, a critical movement that saw poems as complex, and tended to ignore their historical context. F.R. Leavis Leavis was an inspiring lecturer and proponent of new criticism, who believed firmly that the work of a literary critic was to analyze the morality and sincerity of a text. These approaches still inform the study of English Literature both at the University of Cambridge, and around the world. Courses mix modern and more ancient texts, focus both on language and criticism as well as creative writing, draw on context and adaptation, and, in the spirit of innovation, look increasingly to technology and film. Cambridge is considered by many to be considered as the birthplace of the study of English Literature as we currently understand it, so what better place to learn and be inspired?