A perfect day for punting

A perfect day for punting 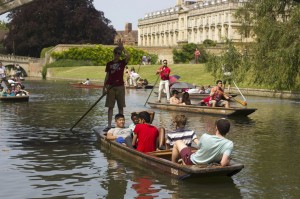 that matter—is the chance to punt on the Cam River.  Frequently confused with a gondola, a punt is a flat bottomed boat that is propelled by a pole, rather than an oar, and thus can be great fun for novices to try out. Cambridge probably has more punts than any other city in the UK—including Oxford—because the River Cam is so shallow and thus ideal for punting, and the views of the backs of the Colleges are postcard perfect!
Reach students enthusiastically took to the Cam on Friday 5th July under sunny skies with a temperature of 20°C (a heat wave has hit Britain!). Many said that once they had got the hang of it, they really enjoyed it, the common consensus being that it of course was much harder than it looked! It was actually hilarious seeing the students starting off as most of them spent the first 20 minutes spinning the punt in circles before finally getting a grip of how to steer them, although they soon mastered the technique! 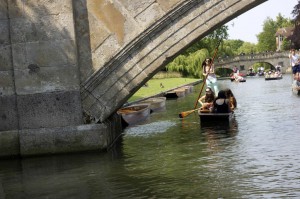 Having the students float by on the Cam with the other tourists was a satisfying sight; almost everyone had an actual go at punting which was great. A lot of them were being distracted by families of ducks that made their way gracefully past the punts (a truly heart warming sight on a gloriously sunny day).
An unexpected addition to the end of the day was a punt hosting a group of choristers who graced the other punters with an angelic rendition of ‘I cannot tell’. With the sun on their faces and a cool breeze guiding them along the river, this concluded what can only be described as a beautiful afternoon.