It’s the second day of the excursion weekend! Yesterday we had a chance to see Shakespeare’s play, and today it was time to see his birthplace. The greatest English writer and dramatist was born and is buried here in Stratford-upon-Avon. But before that, we experienced another way of getting into the rich history of Great Britain: visiting Warwick Castle, a massive stone fortress originally built by William the Conqueror. This is where we started our adventure. By stepping into Warwick castle, we stepped into the year of 1068 when it was built. An incredible fact is that the castle has been maintained in all its magnificence right through to the present – hence we actually did have the chance to travel back in time! What is more, the castle will continue to be preserved, as it is protected against unauthorised change as a Scheduled Ancient Monument, in recognition of its status as a nationally important archaeological site/ historic building. 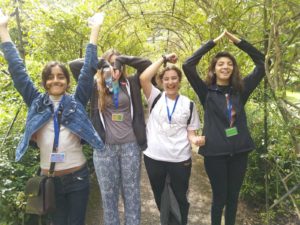 Lost in the maze!

The students not only got lost in time but also had fun getting physically lost… They chose their path through time to unravel history in the world’s first Horrible Histories adventure maze! Through this, they faced fun challenges: invading the Vicious Vikings, surviving the trenches, and uncovering evil plots along the way. Other students had a different but nonetheless incredible adventure, climbing the castle’s highest towers. However, we believe that the most exciting thing for everyone was ‘The Falconer’s Quest’, the UK’s biggest bird of prey show, where eagles, condors and owls swooped through the air over our heads to perform a dynamic display of aerial acrobatics. After all that excitement, students were taken to the aforementioned Stratford-upon-Avon, a lovely, picturesque English town filled with many opportunities to find out more about Shakespeare and his great work. Students enjoyed walking around stone-paved streets, surrounded with Elizabethan architecture. One of the most incredible things to see was, of course, Shakespeare’s birthplace… where William himself was just an ‘infant, mewling and puking in the nurse’s arms’!* 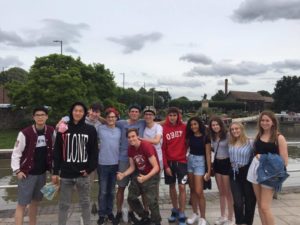 Some of our Program 2 students in Stratford-Upon-Avon

The day was not over after the excursions. While some students chose to watch Johnny English for Movie Night (starring University of Oxford alumnus Rowan Atkinson), others played card games. Some also worked on their presentations for our upcoming World Fair. We cannot wait until our students show us their presentations and tell us about the countries they come from. What will tomorrow bring? Why, the beginning of the second week of Program 2… and a well-deserved lie-in! Written by Ola *As You Like It, Act 2, Scene 7