AKA The London Exploration Day

Excited faces greeted the two coaches as they pulled up outside Downing site under the ashen sky and tumbling clouds – for today was excursion day! 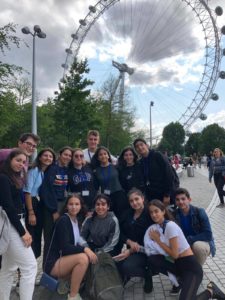 Eye spy a group of explorers…

After a couple hours on the coach, the students arrived in London and were separated into two groups depending on the activities of the day. Half the students travelled to the famed Shakespeare’s Globe theatre to watch Henry V in true Elizabethan style; standing in the yard as ‘Groundlings’. The play follows the life of the young king who embarks on an expedition to France, managing to defeat the French at Agincourt, despite a badly outnumbered army. The students loved the play, even if it did mean having to stand for three hours. The students then eagerly made their way to the Tate Modern, where they explored a myriad of 20th century contemporary art. The Tate Modern holds the national collection of British art from 1900 to the present day and international and contemporary art. The students left with a greater understanding and better appreciation of modern art – we hope! The second group of students had the pleasure of seeing London from the safety of a ferry as it navigated along the Thames. Heavy rains soaked the group in the queue to the ferry, but during the cruise the clouds lifted, and the sun shone down upon the students, raising sodden spirits and turning those frowns upside down. Starting at Greenwich pier and finishing at the London Eye, the students managed to spot The Tower of London, London Bridge and Big Ben along the journey. On arrival the students relaxed on the grass in the shadow cast by the London Eye and explored the Southbank, including the street performers and the food market. 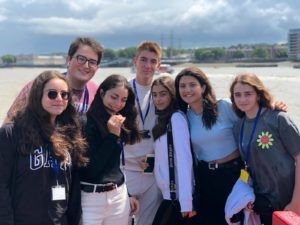 On the River Thames

Back in Cambridge, the students relaxed in college, joining in with ‘casino’ and board game night and playing Nintendo Switch in the lecture theatre. The students went to bed tired from the long day but full of excitement for another day of excursions. Written by Joe

I’ve learned so much more than I could ever imagine in this course. It’s also pretty much solidified my choices for university.