Today started for the Reach students with a well-deserved lie-in, following a weekend when they had the chance to explore the city of London with its rich history and numerous curiosities. However, for those studying Law and Engineering, the London-based adventures did not stop here. The Engineering students went to the Barbican, where they viewed an exhibit on Artificial Intelligence and discussed profound issues, like the ethical uses of facial recognition and information recording or even the potential of artificial life. The Law students visited a real law firm in Baker-McKenzie and got to watch a real trial in action in the Supreme Law Court.

While the members of our little Reach contingent spent their time in London for the third day in a row, the other students had a no less exciting day. It kicked off later than usual, the classes starting at 1 pm, so everyone had their batteries charged and were ready for action. Those studying Psychology took a look a the physiology of the brain and how synapses work, while those doing Computer Science made further advances with their work on robots. Later, the evening started with the well-known series of lectures, today’s one being called Collapsing Masculinities, that discussed how stereotypes about men impact our society. Needless to say that the students were very engaged and participated in the debate, bringing up interesting arguments and displaying mature thinking. 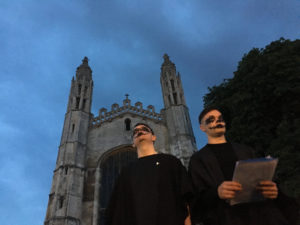 The highlight of the day however was less academic in nature and featured a Ghost Tour of Cambridge, organised and played by our talented supervisors. Some of the students found it spooky, while others found it amusing, but what all had in common was that they all had a great time. Written by Luke

APPLY BEFORE 10TH FEBRUARY TO SAVE £100 PER PROGRAM