Despite it only feeling like five minutes ago since Reach Summer 2019 began, our excursion weekend has already begun.  The last week has been filled with fun, activities and learning, but it’s also been hard work, so everyone was in need of some adventure.

As usual on excursions, it was an early morning after which we all piled into coaches to travel back into the heart of the capital. This in itself is pretty cool, because the route took us over Tower Bridge and past the Great Tower of London, two very famous – not to mention visually spectacular – landmarks. 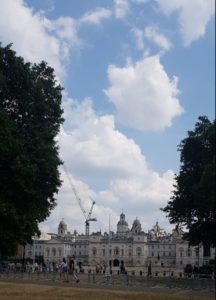 Samuel Johnson once wrote that “by seeing London, I have seen as much of life as the world can show.” This is probably because there’s so much going on in London, and it’s impossible to see it all. So it’s little surprise that we split into two groups today!

Group A went straight to the South Bank, a long stretch of restaurants and markets all overlooking the famous River Thames, which was glittering in the gorgeous English sunshine. Students were given the opportunity to explore for themselves, locating nice cafes for brunch and walking around the many market stalls. Other students chose to accompany their supervisors to the Tate Modern, a majestic modern art gallery housed inside an abandoned power station. Modern art, admittedly, is not to everyone’s taste, but students got to see a model of a city made out of couscous, a puppet operated by large clanking chains, and a panoramic view of the city that proves once and for all that architecture is also legitimate art.

After this, Group A met at Shakespeare’s Globe, a reinterpretation of the original theatre of the great Bard of Stratford-upon-Avon built by Sam Wanamaker in 1997. The students saw a production of A Midsummer Night’s Dream, a raucous comedy about love, forests, fairies and magic. All the students really seemed to enjoy the play, with the general consensus being: ‘I barely understood the words, but I laughed so much!’

“By seeing London, I have seen as much of life as the world can show.”

Group B on the other hand were treated to a guided walking tour of London. They were lucky to be able to explore all the sights, from St. Paul’s Cathedral to the London Eye. They also got to take in the plethora of buskers, weddings and street performers that litter the city before ending up in Covent Garden, one of the main London markets and the site of the Royal Opera House.

It was then back on the coaches to Cambridge, where students could watch a movie or play some games in the Reach “Casino”… although, most were so tired after the day’s festivities that they went straight to bed!