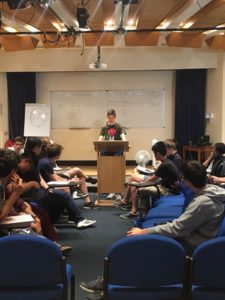 The Future is Nuclear Debate

Today was a day packed with class activities! The Biotechnology students travelled to the Pharmacology Department for some hands on experience in the university environment. The English Literature students travelled to Grantchester, a small village outside of Cambridge to experience the environment in which many of the poems they had been studying was written about. The Medicine students were hands on their DNA and protein decoding practicals, while the Physics student hosted a debate, arguing the statement “The Future is Nuclear”, tackling the ethical, environmental, political and scientific consequences of nuclear energy. In the afternoon, some of our students who did not get the chance last week enjoyed the delights of the old Cantab tradition of punting. They were taken on a tour along the river Cam, and enjoyed hearing the tales of the different colleges along its shores. Other students enjoyed some sports on the Downing Paddock, others simply made the most of the sunny Cambridge weather without running around. 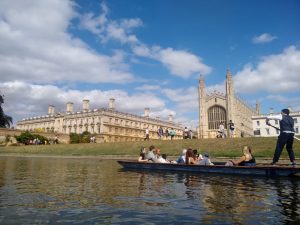 In the evening, after a breath-taking talk on our place in the Universe, our students played an action-packed hour of Capture the Flag.  Team Ice and Team Fire faced each other in an epic duel of wits and agility! This was Squad Wars at its peak, there was absolutely everything to play for. As always, we had a contingent who preferred an option that involved less exertion, and so  opted for the calm of some board games, some snacks and great conversation, in our very cosy Board Games & Chill. We are approaching the second half of the last week of the program, and we’re all having the time of our lives! Long-lasting friendships are being made and the students are being part of life-changing experiences. Here’s to all of us! Written by Alvaro, Register Monitor