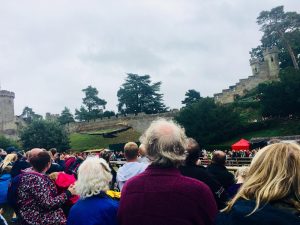 Today our Reachers dived further into the rich history of Great Britain by visiting Stratford-upon-Avon, birthplace of nobody less than William Shakespeare, and Warwick Castle, a massive stone fortress originally built by William the Conqueror. We made a great start by leaving right after an early breakfast, with packed lunches in our rucksacks. Our first stop was the picturesque town of Stratford-upon-Avon, which offered its stone-paved streets surrounded with Elizabethan architecture for our students to explore. We were quick to find Shakespeare’s birthplace, and to learn some interesting facts about him, such as that he, the ‘Bard of Avon’, is the best-selling fiction author of all time with 4bn copies sold! Our next stop was filled with one of the UK’s most exciting attractions  whch has a long and chequered history. Warwick Castle was built in 1068, making it older than the University of Cambridge, and yet like the University, it has been maintained into the present day in all its grandeur. One of our students, Emily, particularly enjoyed the jousting event while cheering with a large foam finger. The excitement here was matched only by the ‘Flight of the Eagles Show’ where eagles, condors and owls swooped through the air over our heads. Some of our more adventurous students also enjoyed finding their way inside a large hedge maze; others climbed the castle’s highest tower together with our supervisors. The day was not over after the excursions. While some students opted for a relaxing movie night watching About Time, others were taught how to play rounders, the British equivalent of baseball. Still others worked on their presentations for our upcoming World Fair, a night where Reachers tell us about the countries they come from. Soft you now, ‘tis but another of our memorable excursions. Written by Tim , Supervisor