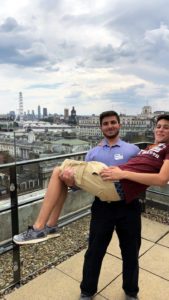 Two days of excursions can only ever lead to one thing, a well-deserved lie in. Follow this with a nice brunch at one of Cambridge’s many picturesque cafes and eateries, and you have a pretty perfect morning. That is exactly what the students of Reach Cambridge were treated to today. Considering the beautiful weather this morning, it was the perfect time for a bit of sightseeing and a spot of casual retail therapy.

This afternoon classes resumed, and students spent their days diligently attending to their studies. Though one group of students were deprived of their lie in, and had the opportunity to return to London for Reach’s “University Advance” add-on. They were treated not one but two tours, one of University College London and the other, King’s College London, two sprawling metropolitan universities. These London Universities are very different to the halls of Cambridge, which gave our students an opportunity to look at a different style of university, hopefully to help them make the big decisions that face them in their futures.

As for the Cambridge students remaining in Cambridge, those staying at Trinity Hall got a chance to see how the other colleges operate, as they headed to Downing and Christ’s for dinner. This was a fun meal swap, where students who have been making their homes at different colleges got to show off the halls and the food they’ve been enjoying. 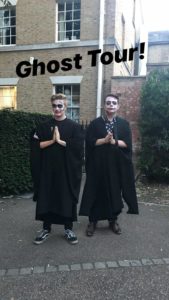 Tonight’s lecture was also a bit of an adventure, as the students were walked to a new venue, the Engineering faculty. Here they received a fascinating lecture on Criminology. The complex art of figuring out identities, and working out what is real and what isn’t certainly came in handy later that evening, when students were taken on a chilling ghost tour of Cambridge. Led by supervisors Josh and Daniel, decked out in terrifying make-up and long black gowns, they were told story after story of the mystic, the unexplained and the terrifying, woven throughout the cobbled streets of the city. They were even visited by a few “ghosts” who pelted them with marshmallows and hopefully made one or two of them jump.

There’s a lot more fun to come this week, and the students headed to bed to get some much needed rest, ready to tackle everything as Reach’s last week continues!