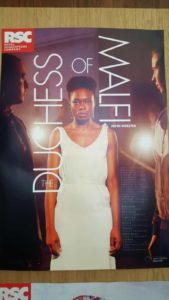 There’s nothing better, after a week of lectures and making new friends, than hopping on a bus and going somewhere new. Reach Cambridge likes to fill the weekends with exciting excursions to different tourist attractions throughout the country.

Today, students were up bright and early for breakfast, then piled on a coach for a two hour journey to Stratford-Upon-Avon. Luckily, the period of beautiful sunshine continued and it was gloriously hot all day! This town is the birthplace of England’s most famous wordsmith William Shakespeare, author of such works as Hamlet, Romeo and Juliet and Much Ado about Nothing.  Students got the chance to wander around the town, some were even taken to see famous sights like Shakespeare’s house and his burial site by supervisors Holly and Scott. Others chose the more relaxed approach, and had a picnic lunch in the spacious lawns outside of the renowned RSC Theatre under the warm rays of the summer sun. Others took the time to do a little shopping, making use of the cosy bookshops Stratford has to offer.

Following this, the group split into two. One group, mainly composed of those studying English on the program, went to the Swan Theatre to see John Webster’s The Duchess of Malfi, a tragic and dark tale. This is a quintessential Renaissance revenge tragedy, and a completely unique experience for anyone visiting the UK!  Everyone was promised a gory but enjoyable time, and according to the students, the theatre truly delivered! We can only hope that no one has any nightmares! 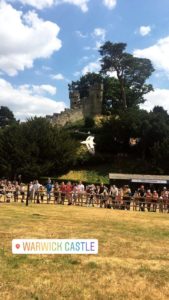 The second group climbed back onto the  bus to travel to Warwick Castle, which was built in the 12th Century and based on designs by William the Conqueror. The castle was filled with things for us to explore, from a history themed maze that everyone got lost in, to live jousting and a birds of prey show that Scott described as “summer defining.”  One of the supervisors narrowly escaped an unplanned meeting with a Condor, but everyone else seemed to have a fantastic time. There were Reach Cambridge students crawling over the battlements, climbing to the top of the tallest towers and taking in the surrounding views of the beautiful countryside. Of course, there were also a few people who  simply preferred to relax in the sun, and keep an eye on the progress of the England Game in the World Cup!

There was no greater testament to the business of the day than the hordes of people who fell asleep on the coach home. That’s not to say there wasn’t a whole host of activities going on around the colleges in the evening. From football screenings, to party games, to sport on the paddock, we’re simply spoiled for choice!

© Copyright Reach Cambridge Ltd. All rights reserved.
Privacy Policy – Terms & Conditions – Legal Disclaimers
Reach Cambridge is not affiliated to the University of Cambridge or its constituent colleges.
Apply before 15th November to save £400
APPLY NOW

Or to find out more, please contact us or register for a free Reach Cambridge webinar. The next available dates and times are as follows: