frieThe holiday season may be coming to an end, but there’s still plenty to celebrate as we head into 2018. From fancy feasts to smashing plates, here are just a few New Year’s Eve traditions from around the world… 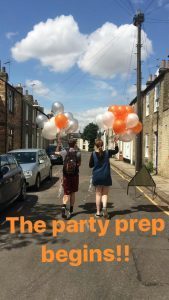 If you love ringing in the New Year, head to Greenland or Japan, where the celebrations last longer! In Greenland, the New Year is celebrated twice – once at 8.00pm when it has reached Denmark, and once at midnight. In Japan, the New Year is called ‘Shogatsu’ and celebrations last from December 31st – January 4th. Some countries involve animals in their New Year festivities. In Iceland, New Year’s Eve is known as ‘Gamlárskvöld’, and it’s one of the most magical nights of the year! Apparently, cows can speak and seals become humans (plus elves move house and the dead rise from their graves). Romanian tradition involves chatty animals too, as farmers try to understand their flock on New Year’s Eve. However, they don’t want their animal whispering to be successful: if they can’t hear the animals talk, that means good luck for the new year. 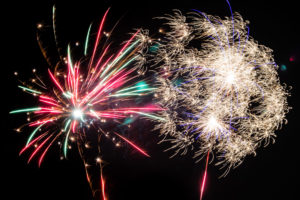 Fireworks across the globe

Food features in many New Year celebrations across the globe, including in Spain. ‘Nochevieja’ (meaning ‘The Old Night’) involves eating a grape for each stroke of the clock at midnight – if you can eat all twelve, you will be lucky in the new year. In Hungary, people eat pork for dinner on New Year’s Eve to bring in a year of prosperity, and avoid chicken and fish on New Year’s Day to ensure the good fortune doesn’t fly or swim away. France also welcomes the New Year with a special feast which can include foie-gras and champagne, while in the Netherlands, they have ‘oliebollen’ (deep-fried donuts) and ‘appelbeignets’ (apple fritters). But not every country’s tradition involves eating food – in Ireland they bang loaves of bread on walls and doors to ward off bad spirits and bring in good luck, while In Switzerland, there’s a tradition of dropping ice cream on the floor on New Year’s Eve. 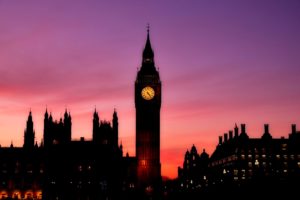 Big Ben in London will chime at midnight

In Denmark, they’re more interested in the tableware than the food, as people break plates on New Year’s Eve. The tradition includes saving all your old crockery throughout the year and smashing it against your friends’ doors on New Year’s Eve – the bigger the pile of broken plates on your doorstep at midnight, the more popular you are! If you’d like to know how we’ll be celebrating here in Cambridge, it’s customary in the UK to have New Year’s Eve parties with family and friends, and many people travel to London to see a huge fireworks display. People stay up until midnight, then let off fireworks and sing the Scottish song “Auld Lang Syne” to welcome in the New Year. Scotland has its own traditions for New Year’s Eve, called ‘Hogmanay’, and this includes ‘First-Footing’ – the first person to put their foot across the threshold of a home should bring gifts to signify luck. Our favourite tradition of all, though, appeals to our love of travel. In Ecuador, people walk around their neighbourhood with a suitcase that’s completely empty except for a few items symbolising the places they want to visit in the New Year. It’s a good one to try if you’re hoping to come to Reach Cambridge in 2018!