Day two of the Reach Scholar program began with a diverse academic schedule. The Law class went on an excursion to Cambridge Crown Court, getting the opportunity to sit in on local cases; the Biotechnology class learned about a unique form of cancer suffered only by Tasmanian Devils; and the Psychology class studied the mental processes behind prejudice and gender differences. The Medical Sciences and Chemistry class did an experiment to find out how the structure of molecules affects their properties. They compared the smell of substances formed of almost identical chemical compounds, identical in everything except that they were mirror images of each other. Despite their similarity students found that these mirror chemical compound pairs produced substances with very different smells, for example spearmint and caraway seeds, or orange and lemon fruits. In the afternoon, supervisors Holly and Zach ran a university applications Q&A session. With Holly studying at Cambridge and Zach at University College London, they were able to answer a wide variety of questions that the students had about key differences between UK universities and their application processes. Holly also gave an insight to the eccentricities of Oxbridge applications and the collegiate system. Both supervisors offered some general information about university life, personal statement writing and choosing courses. Later in the week, there will be the opportunity for students to attend practice interviews and a personal statement writing workshop. 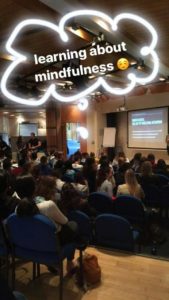 After dinner, students attended a lecture on mindfulness, led by a wellbeing researcher from the Policy Research Group at the University of Cambridge. Students were introduced to the practical applications of this relaxation-through-meditation practice, specifically how it can be used to improve focus in study and work. They also got the chance to put the theory into practice, participating in some guided meditation exercises led by the speaker. After the lecture, students were free to attend a T-shirt painting activity, using fabric dyes to create their own clothes designs. Other students partook in a planning session for the World Fair tomorrow, an evening activity in which students will get the opportunity to showcase their country’s culture. ~by Holly & Laura