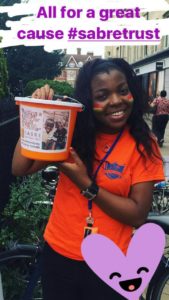 Today was a big day here at Reach Cambridge – SABRE day! Central Cambridge boomed to the sound of African drums this afternoon as part of a charity fundraiser organised and run by our Community Outreach students. Reach has a long established relationship with the SABRE charity, who work with the Ghanaian government to develop early years teaching and build better schools there. The work carried out by SABRE, in part funded by Reach both past and present, has done much to improve education in Ghana and thereby provide its children with avenues of departure from poverty.   The afternoon saw a merry band of traditional Ghanaian drummers teaching both students and the public how to play a number of funky beats, culminating in a high energy parade through town filled with dancing, drum beats and a man regularly spinning pans atop an umbrella balanced on his chin. The parade then returned, but the fundraising frivolities were far from over. Many groovy shapes were thrown during the drumbeat dancing session, and faces were painted with the green, red and yellow of the Ghanaian flag. Countless cupcakes decorated by our students were sold, and a raffle for a myriad of prizes has now left many on tenterhooks in the hope of winning a substantial amount of fudge.

Today’s lessons saw the Literature class take a trip to Cambridge’s very own – and very grandiose – Fitzwilliam Museum to admire its fantastic architecture, artefacts and of course artworks and to learn of their literary context. It was Corridor Dinner Night too, so students could be seen in various eateries across the city – with Wasabi sushi being a strong favourite – as well as munching pizza on Downing Paddock with their supervisors and corridor-mates. The evening lecture followed up yesterdays on Brexit rather nicely: given by a real-life diplomat, it described a career in the civil service and the sector’s role within politics. 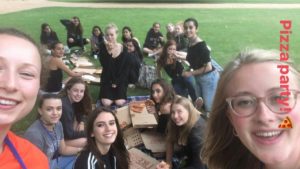 After talks of diplomacy came the evening activities. And by now we all know what Wednesday means – summer student DISCO! The third and final instalment of the hottest night of the week (in both the literal and non-literal sense) did not disappoint. We saw bigger crowds, bigger moves and even bigger non-alcoholic beverages. “Can it GET any bigger?!” I hear you cry. Well, yes. Tune in on Friday when what is lined up to be the BIGGEST event of all – the Departure PARTY, which will surely eclipse the huge scenes of Wednesdays gone by…