Cambridge experienced some very ‘British’ weather today: blue skies followed downpours, downpours followed blue skies, in a never-ending cycle of meteorological confusion. However, lessons went on as usual, and the English Literature students in particular were treated to an exciting educational excursion. They sought poetic inspiration on their journey around Cambridge’s most wistful sites, stopping on the Bridge of Sighs to peer into the watery depths of the noble River Cam. They also visited the Sedgwick Museum, the Round Church and ‘Newton’s Tree.’ The trip proved to be a very fun and interactive way to learn and reflect on their time in Cambridge so far. 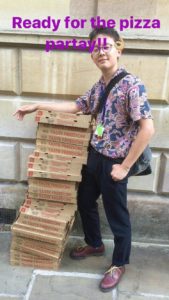 It’s been non-stop excitement with lessons, activities, friendship-forming and city orientation since Arrivals Day last week. As such, in the afternoon the students enjoyed some much-needed down-time, and were seen munching sandwiches and slurping ice creams on Jesus Green. Although the rain initially proved problematic for those running sports on Downing Paddock, it soon dried, and many students enjoyed a fast-paced football game until dinner time. Dinner in Trinity Hall was particularly delicious today, with students having a pizza party on the terrace. After dinner, there was a lecture on ‘Mind Palaces’ in Trinity Hall, in which students learned about the exciting new applications for Virtual Reality in the field of memorising and language-learning. The highlight of the day, however, was Reach’s spooky and exhilarating Ghost Tour around Cambridge, which featured two ‘ghosts’ (complete with a ghoulish garb of bin-bags and white masks) jumping out at students as they were thrilled by Ros’ and Tim’s eerie stories of Cambridge’s other-worldly past. For those less ghoulishly-inclined, there was a mellow and merry art session in Trinity Hall, with painting and sketching proving particularly popular. Other students decided to simply socialise in college, and a tense poker game occurred in the Common Room. Overall, it was an exciting and relaxing day, which was well deserved after a very busy weekend. 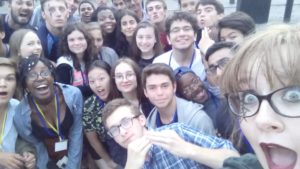